So I purchased the IC-3000 for my trailer last summer. The reason was it was a load sharing inverter that supported the split phase service. First all the documentation will lead you to believe that the unit will work on both legs - it does not! As a inverter or during load sharing, the unit only works on one of the two legs. The second issue is with my AGM batteries the unit will not charge them at the full 120a DC the unit is capable of. When the batteries are low, I can only get around 90a DC at best.

The most important issue with the Go Power IC-3000 is the load sharing does not always work properly. When a large load turns on, it will trip the surge protector in the coach which disconnects the main power. This forces all the load onto the inverter, the problem is the unit will not turn back on the mains. Once the main power has been disconnected by the IC-3000 the only way to get it working is to turn off all AC and DC systems and “reboot” the electrical stystem!

Finally the problem that forced me to remove the unit and return it was it does not properly support monitoring the max shore power. When you dial the IC-3000 remote to say 15a such as when you are driveway surfing, it can and will pull MORE then 15a from the outlet. It seems something is wrong with the way the unit senses AC power and will easily blow past 15a. I have literally melted the 50->15a dogbone adapter because I could not properly limit the input power!

Both the Go Power IC-2000 and IC-3000 have these same issues. I can’t implore people enough to stay from this clearly substandard product! I would recommend for inverter/chargers to stick with a known brand such as Magnum or my personal favorite Victron!

Feel free to hit me up with any questions anyone has!

This came up on Reddit over the summer. Many people were complaining about all kinds of strange issues with the GoPower IC Inverter/Chargers.

As I recall someone had one that had a melted relay which they said was a “know defect”. The problem was they were on a trip and had no charger till it was replaced. Not something I want to deal with!

I also remember taking about the fatal flaw that is seriously dangerous, the units back feed your shore power plug in inverter mode. If you for example have a shore cord unplugged you can get shocked because the male prongs are live! This is against electrical code here in the US.

I remembered this video from a YouTuber about the units which is worth watching:

I was looking last summer and I was about to pull the tigger on a Magnum inverter charger. I ended up purchasing and then returning the Go Power IC-2000 unit as well. I had similar issues to the other people in this thread. It’s a Chinese built POS!

No question go with Victron. You can call the US support guys who are in Maine and they can help you. We went with dual 3000 units for our camper which allows inverter on both 50a legs.

If not Victron Magnum or Mastercraft. AIMS and Go Power are just cheep import stuff.

I will say that I am looking for an inverter charger for my Imagine 2850MK. I am getting ready to pull the trigger and I have seen numerous complains about the Go Power IC units across various groups and reviews. I am going to stick with the tried and true Victron Multiplus. It seems nobody makes a inverter charger that handles both legs of 50a service and provides a inverter for both legs.

For the Victron Multiplus with PowerAssist feature (adding AC from DC batteries to the existing supply) a single Multiplus can handle, I think 68a total. Just consider that for most people that means you could bridge both sides of your 50a panel into a single 50a service. Then you can use the extra 18a with PowerAssist when you need the extra power. It is almost as good as 100a service but without all the hassle. The other option is you can link two Multiplus units togather to make one large unit for both legs if you want to do it that way.

What unit did you end up with? 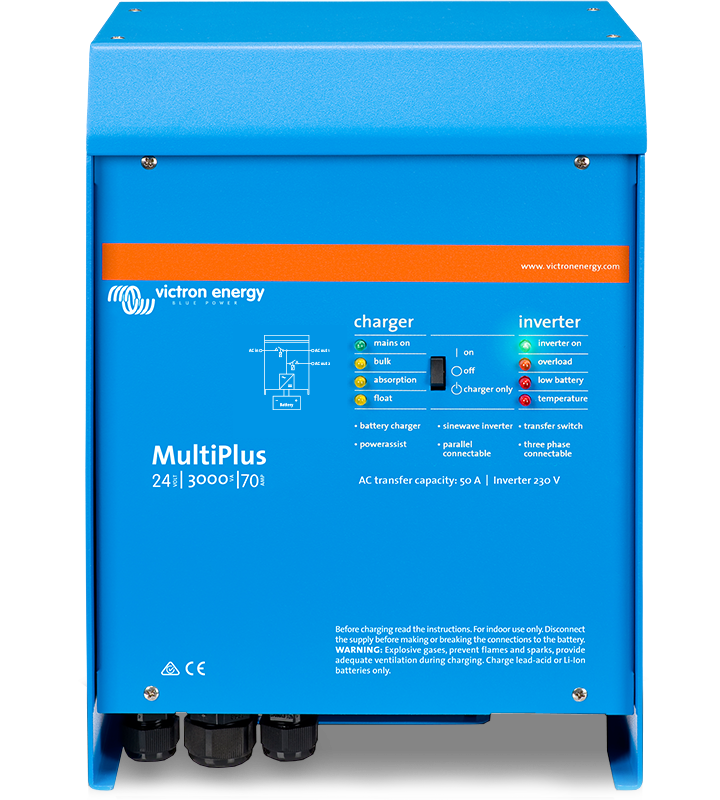 The MultiPlus, as the name suggests, is a combined inverter and charger in one elegant package. Its many features include a true sine wave inverter,...

I am not going to lie, I had issues with the Victron but they all worked out in the end. The key problem was almost every time I would be running on my Honda EU2000 generator when the Power Assist feature would kick in (boosting the generator output from the battery) a relay would trip, completely knocking the generator offline. At this point the UPS function of the Victron would seamlessly kickin and I would be running 100% off battery’s and then the relay would “click” and generator power was added back in.

Long story short the issue was my Progressive Industries EMS-HW50C surge protector. It’s not really a fault of the HW50 but really the Victron Multiplus. Numerous calls to Victron later, we finally figured out that the Victron does not know how much power is going to be used, so it “boosts” the maximum input amps you have set. So if I have say 10a maximum selected and the boost factor was 2, when Power Assist starts helping, it will momentarily put (10a x 2) on the wire. The HW50 sees this as a surge, disconnects the relay inside in HW50 killing shore power.

I ended up getting the computer interface for the Victron Multiplus, went in and lowered the boost factor to 1.25, I believe. I have not had the issue again.

I will say that Victron technical support said they don’t recommend using the Multiplus in conjunction with a surge protector and it can take over all the surge protection functions for you. So that may save some folks some money if they are looking to go this route.

@Bruce201 I am a huge fan of the Victron Multiplus and also the Magnum MSH lines of hybrid inverters. I have helped install a bunch of Victron’s recently, the biggest benefit of Victron is all the gear communicates into a single display.

I installed two IC-3000’s last year. The one install did not work with a 2000 watt inverter generator in load support mode, they blamed faulty firmware in the controller. They had to send new remote control for the unit but the second clearly was updated but same issue. At some point it the relay would disconnect the shore power, the generator would idle, batteries were used till the batteries died and blackout. They you have to turn all power off and restart the generator, inverter and hope it didn’t happen again. Ultimately pulled this one out for a Magnum MSH.

Then I had to replace one when I told them that both legs were inverting. They said the relay was stuck and it shouldn’t be powering both legs. I argued that is not what the manual diagram said and they noted the manual has mistakes they keep fixing. I think @Bruce201 eluded to this in his first post. The original manuals last year indicated that the IC-3000 provided 3000 watts across both legs on 50a trailer. In reality they just provide 50a on one leg and the other is a pass through. Since this was a completely failed unit refunded, a pair of Victron Multiplus were installed because the customer wanted both legs to fully function. The Multiplus (and Magnum) can be stacked to allow two units to provide power to both legs.

I hate to beat on the Go Power team but its a crappy inverter design.

So, you had a low powered generator and expected it to run like an Onan 5500? no wonder you were disappointed! Never on my worst day would I expect a 30 AMP to run both my ACs